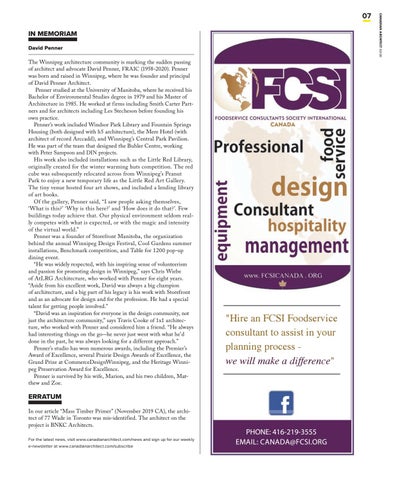 The Winnipeg architecture community is marking the sudden passing of architect and advocate David Penner, FRAIC (1958-2020). Penner was born and raised in Winnipeg, where he was founder and principal of David Penner Architect. Penner studied at the University of Manitoba, where he received his Bachelor of Environmental Studies degree in 1979 and his Master of Architecture in 1985. He worked at firms including Smith Carter Partners and for architects including Les Stecheson before founding his own practice. Penner’s work included Windsor Park Library and Fountain Springs Housing (both designed with h5 architecture), the Mere Hotel (with architect of record Arccadd), and Winnipeg’s Central Park Pavilion. He was part of the team that designed the Buhler Centre, working with Peter Sampson and DIN projects. His work also included installations such as the Little Red Library, originally created for the winter warming huts competition. The red cube was subsequently relocated across from Winnipeg’s Peanut Park to enjoy a new temporary life as the Little Red Art Gallery. The tiny venue hosted four art shows, and included a lending library of art books. Of the gallery, Penner said, “I saw people asking themselves, ‘What is this?’ ‘Why is this here?’ and ‘How does it do that?’. Few buildings today achieve that. Our physical environment seldom really competes with what is expected, or with the magic and intensity of the virtual world.” Penner was a founder of Storefront Manitoba, the organization behind the annual Winnipeg Design Festival, Cool Gardens summer installations, Benchmark competition, and Table for 1200 pop-up dining event. “He was widely respected, with his inspiring sense of volunteerism and passion for promoting design in Winnipeg,” says Chris Wiebe of AtLRG Architecture, who worked with Penner for eight years. “Aside from his excellent work, David was always a big champion of architecture, and a big part of his legacy is his work with Storefront and as an advocate for design and for the profession. He had a special talent for getting people involved.” “David was an inspiration for everyone in the design community, not just the architecture community,” says Travis Cooke of 1x1 architecture, who worked with Penner and considered him a friend. “He always had interesting things on the go—he never just went with what he’d done in the past, he was always looking for a different approach.” Penner’s studio has won numerous awards, including the Premier’s Award of Excellence, several Prairie Design Awards of Excellence, the Grand Prize at CommerceDesignWinnipeg, and the Heritage Winnipeg Preservation Award for Excellence. Penner is survived by his wife, Marion, and his two children, Matthew and Zoe.