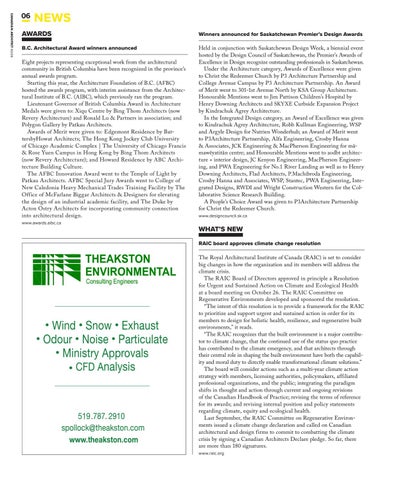 Eight projects representing exceptional work from the architectural community in British Columbia have been recognized in the province’s annual awards program. Starting this year, the Architecture Foundation of B.C. (AFBC) hosted the awards program, with interim assistance from the Architectural Institute of B.C. (AIBC), which previously ran the program. Lieutenant Governor of British Columbia Award in Architecture Medals were given to: Xiqu Centre by Bing Thom Architects (now Revery Architecture) and Ronald Lu & Partners in association; and Polygon Gallery by Patkau Architects. Awards of Merit were given to: Edgemont Residence by BattersbyHowat Architects; The Hong Kong Jockey Club University of Chicago Academic Complex | The University of Chicago Francis & Rose Yuen Campus in Hong Kong by Bing Thom Architects (now Revery Architecture); and Howard Residence by ABC Architecture Building Culture. The AFBC Innovation Award went to the Temple of Light by Patkau Architects. AFBC Special Jury Awards went to College of New Caledonia Heavy Mechanical Trades Training Facility by The Office of McFarlane Biggar Architects & Designers for elevating the design of an industrial academic facility, and The Duke by Acton Ostry Architects for incorporating community connection into architectural design. www.awards.aibc.ca

The Royal Architectural Institute of Canada (RAIC) is set to consider big changes in how the organization and its members will address the climate crisis. The RAIC Board of Directors approved in principle a Resolution Consulting Engineers for Urgent and Sustained Action on Climate and Ecological Health at a board meeting on October 26. The RAIC Committee on Regenerative Environments developed and sponsored the resolution. Wind Snow Exhaust “The intent of this resolution is to provide a framework for the RAIC to prioritize and support urgent and sustained action in order for its Odour Particulate members to design for holistic health, resilience, and regenerative built • • MOECC• Approvals environments,” it reads. “The RAIC recognizes that the built environment is a major contribu• • • tor to climate change, that the continued use of the status quo practice has contributed to the climate emergency, and that architects through • (519) 787-2910 spollock@theakston.com www.theakston.com their central role in shaping the built environment have both the capability and moral duty to directly enable transformational climate solutions.” • The board will consider actions such as a multi-year climate action strategy with members, licensing authorities, policymakers, affiliated professional organizations, and the public; integrating the paradigm shifts in thought and action through current and ongoing revisions of the Canadian Handbook of Practice; revising the terms of reference for its awards; and revising internal position and policy statements regarding climate, equity and ecological health. 519.787. 2910 Last September, the RAIC Committee on Regenerative Environments issued a climate change declaration and called on Canadian spollock theakston.com architectural and design firms to commit to combatting the climate crisis by signing a Canadian Architects Declare pledge. So far, there www.theakston.com are more than 180 signatures.