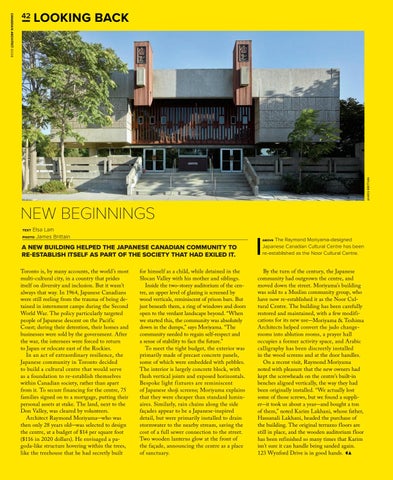 A NEW BUILDING HELPED THE JAPANESE CANADIAN COMMUNITY TO RE-ESTABLISH ITSELF AS PART OF THE SOCIETY THAT HAD EXILED IT. Toronto is, by many accounts, the world’s most multi-cultural city, in a country that prides itself on diversity and inclusion. But it wasn’t always that way. In 1964, Japanese Canadians were still reeling from the trauma of being detained in internment camps during the Second World War. The policy particularly targeted people of Japanese descent on the Pacific Coast; during their detention, their homes and businesses were sold by the government. After the war, the internees were forced to return to Japan or relocate east of the Rockies. In an act of extraordinary resilience, the Japanese community in Toronto decided to build a cultural centre that would serve as a foundation to re-establish themselves within Canadian society, rather than apart from it. To secure financing for the centre, 75 families signed on to a mortgage, putting their personal assets at stake. The land, next to the Don Valley, was cleared by volunteers. Architect Raymond Moriyama—who was then only 28 years old—was selected to design the centre, at a budget of $14 per square foot ($116 in 2020 dollars). He envisaged a pagoda-like structure hovering within the trees, like the treehouse that he had secretly built

for himself as a child, while detained in the Slocan Valley with his mother and siblings. Inside the two-storey auditorium of the centre, an upper level of glazing is screened by wood verticals, reminiscent of prison bars. But just beneath them, a ring of windows and doors open to the verdant landscape beyond. “When we started this, the community was absolutely down in the dumps,” says Moriyama. “The community needed to regain self-respect and a sense of stability to face the future.” To meet the tight budget, the exterior was primarily made of precast concrete panels, some of which were embedded with pebbles. The interior is largely concrete block, with f lush vertical joints and exposed horizontals. Bespoke light fixtures are reminiscent of Japanese shoji screens; Moriyama explains that they were cheaper than standard luminaires. Similarly, rain chains along the side façades appear to be a Japanese-inspired detail, but were primarily installed to drain stormwater to the nearby stream, saving the cost of a full sewer connection to the street. Two wooden lanterns glow at the front of the façade, announcing the centre as a place of sanctuary.

By the turn of the century, the Japanese community had outgrown the centre, and moved down the street. Moriyama’s building was sold to a Muslim community group, who have now re-established it as the Noor Cultural Centre. The building has been carefully restored and maintained, with a few modifications for its new use—Moriyama & Teshima Architects helped convert the judo changerooms into ablution rooms, a prayer hall occupies a former activity space, and Arabic calligraphy has been discreetly installed in the wood screens and at the door handles. On a recent visit, Raymond Moriyama noted with pleasure that the new owners had kept the screwheads on the centre’s built-in benches aligned vertically, the way they had been originally installed. “We actually lost some of those screws, but we found a supplier—it took us about a year—and bought a ton of them,” noted Karim Lakhani, whose father, Hassanali Lakhani, headed the purchase of the building. The original terrazzo floors are still in place, and the wooden auditorium floor has been refinished so many times that Karim isn’t sure it can handle being sanded again. 123 Wynford Drive is in good hands.