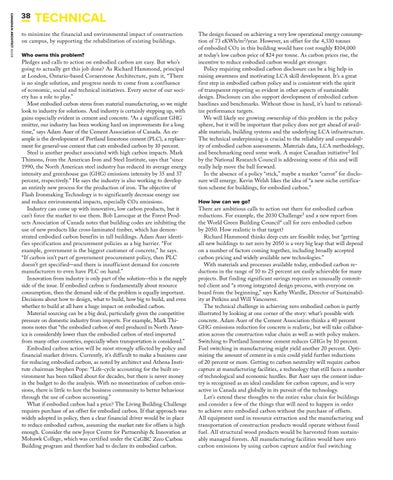 to minimize the financial and environmental impact of construction on campus, by supporting the rehabilitation of existing buildings. Who owns this problem? Pledges and calls to action on embodied carbon are easy. But who’s going to actually get this job done? As Richard Hammond, principal at London, Ontario-based Cornerstone Architecture, puts it, “There is no single solution, and progress needs to come from a conf luence of economic, social and technical initiatives. Every sector of our society has a role to play.” Most embodied carbon stems from material manufacturing, so we might look to industry for solutions. And industry is certainly stepping up, with gains especially evident in cement and concrete. “As a significant GHG emitter, our industry has been working hard on improvements for a long time,” says Adam Auer of the Cement Association of Canada. An example is the development of Portland limestone cement (PLC), a replacement for general-use cement that cuts embodied carbon by 10 percent. Steel is another product associated with high carbon impacts. Mark Thimons, from the American Iron and Steel Institute, says that “since 1990, the North American steel industry has reduced its average energy intensity and greenhouse gas (GHG) emissions intensity by 35 and 37 percent, respectively.” He says the industry is also working to develop an entirely new process for the production of iron. The objective of Flash Ironmaking Technology is to significantly decrease energy use and reduce environmental impacts, especially CO2 emissions. Industry can come up with innovative, low carbon products, but it can’t force the market to use them. Bob Larocque at the Forest Products Association of Canada notes that building codes are inhibiting the use of new products like cross-laminated timber, which has demonstrated embodied carbon benefits in tall buildings. Adam Auer identifies specification and procurement policies as a big barrier. “For example, government is the biggest customer of concrete,” he says. “If carbon isn’t part of government procurement policy, then PLC doesn’t get specified—and there is insufficient demand for concrete manufacturers to even have PLC on hand.” Innovation from industry is only part of the solution—this is the supply side of the issue. If embodied carbon is fundamentally about resource consumption, then the demand side of the problem is equally important. Decisions about how to design, what to build, how big to build, and even whether to build at all have a huge impact on embodied carbon. Material sourcing can be a big deal, particularly given the competitive pressure on domestic industry from imports. For example, Mark Thimons notes that “the embodied carbon of steel produced in North America is considerably lower than the embodied carbon of steel imported from many other countries, especially when transportation is considered.” Embodied carbon action will be most strongly affected by policy and financial market drivers. Currently, it’s difficult to make a business case for reducing embodied carbon, as noted by architect and Athena Institute chairman Stephen Pope: “Life-cycle accounting for the built environment has been talked about for decades, but there is never money in the budget to do the analysis. With no monetization of carbon emissions, there is little to lure the business community to better behaviour through the use of carbon accounting.” What if embodied carbon had a price? The Living Building Challenge requires purchase of an offset for embodied carbon. If that approach was widely adopted in policy, then a clear financial driver would be in place to reduce embodied carbon, assuming the market rate for offsets is high enough. Consider the new Joyce Centre for Partnership & Innovation at Mohawk College, which was certified under the CaGBC Zero Carbon Building program and therefore had to declare its embodied carbon.

The design focused on achieving a very low operational energy consumption of 73 eKW h/m 2/year. However, an offset for the 4,330 tonnes of embodied CO2 in this building would have cost roughly $104,000 at today’s low carbon price of $24 per tonne. As carbon prices rise, the incentive to reduce embodied carbon would get stronger. Policy requiring embodied carbon disclosure can be a big help in raising awareness and motivating LCA skill development. It’s a great first step in embodied carbon policy and is consistent with the spirit of transparent reporting so evident in other aspects of sustainable design. Disclosure can also support development of embodied carbon baselines and benchmarks. Without those in hand, it’s hard to rationalize performance targets. We will likely see growing ownership of this problem in the policy sphere, but it will be important that policy does not get ahead of available materials, building systems and the underlying LCA infrastructure. The technical underpinning is crucial to the reliability and comparability of embodied carbon assessments. Materials data, LCA methodology, and benchmarking need some work. A major Canadian initiative2 led by the National Research Council is addressing some of this and will really help move the ball forward. In the absence of a policy “stick,” maybe a market “carrot” for disclosure will emerge. Kevin Welsh likes the idea of “a new niche certification scheme for buildings, for embodied carbon.” How low can we go? There are ambitious calls to action out there for embodied carbon reductions. For example, the 2030 Challenge3 and a new report from the World Green Building Council4 call for zero embodied carbon by 2050. How realistic is that target? Richard Hammond thinks deep cuts are feasible today, but “getting all new buildings to net zero by 2050 is a very big leap that will depend on a number of factors coming together, including broadly accepted carbon pricing and widely available new technologies.” With materials and processes available today, embodied carbon reductions in the range of 10 to 25 percent are easily achievable for many projects. But finding significant savings requires an unusually committed client and “a strong integrated design process, with everyone on board from the beginning,” says Kathy Wardle, Director of Sustainability at Perkins and Will Vancouver. The technical challenge in achieving zero embodied carbon is partly illustrated by looking at one corner of the story: what’s possible with concrete. Adam Auer of the Cement Association thinks a 40 percent GHG emissions reduction for concrete is realistic, but will take collaboration across the construction value chain as well as with policy makers. Switching to Portland limestone cement reduces GHGs by 10 percent. Fuel switching in manufacturing might yield another 20 percent. Optimizing the amount of cement in a mix could yield further reductions of 20 percent or more. Getting to carbon neutrality will require carbon capture at manufacturing facilities, a technology that still faces a number of technological and economic hurdles. But Auer says the cement industry is recognised as an ideal candidate for carbon capture, and is very active in Canada and globally in its pursuit of the technology. Let’s extend these thoughts to the entire value chain for buildings and consider a few of the things that will need to happen in order to achieve zero embodied carbon without the purchase of offsets. All equipment used in resource extraction and the manufacturing and transportation of construction products would operate without fossil fuel. All structural wood products would be harvested from sustainably managed forests. All manufacturing facilities would have zero carbon emissions by using carbon capture and/or fuel switching