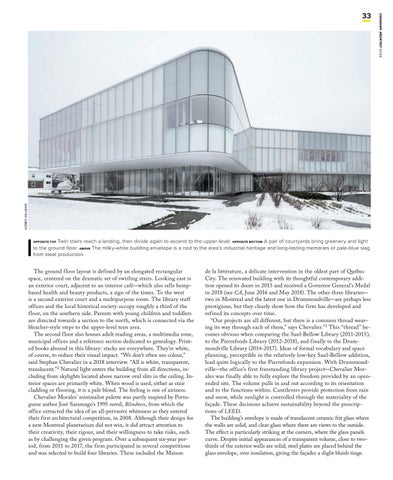 Twin stairs reach a landing, then divide again to ascend to the upper level. OPPOSITE BOTTOM A pair of courtyards bring greenery and light to the ground floor. ABOVE The milky-white building envelope is a nod to the area’s industrial heritage and long-lasting memories of pale-blue slag from steel production. OPPOSITE TOP

The ground f loor layout is defined by an elongated rectangular space, centered on the dramatic set of swirling stairs. Looking east is an exterior court, adjacent to an interior café—which also sells hempbased health and beauty products, a sign of the times. To the west is a second exterior court and a multipurpose room. The library staff offices and the local historical society occupy roughly a third of the f loor, on the southern side. Parents with young children and toddlers are directed towards a section to the north, which is connected via the bleacher-style steps to the upper-level teen area. The second floor also houses adult reading areas, a multimedia zone, municipal offices and a reference section dedicated to genealogy. Printed books abound in this library: stacks are everywhere. They’re white, of course, to reduce their visual impact. “We don’t often use colour,” said Stephan Chevalier in a 2018 interview. “All is white, transparent, translucent.”2 Natural light enters the building from all directions, including from skylights located above narrow oval slits in the ceiling. Interior spaces are primarily white. When wood is used, either as stair cladding or flooring, it is a pale blond. The feeling is one of airiness. Chevalier Morales’ minimalist palette was partly inspired by Portuguese author José Saramago’s 1995 novel, Blindness, from which the office extracted the idea of an all-pervasive whiteness as they entered their first architectural competition, in 2008. Although their design for a new Montreal planetarium did not win, it did attract attention to their creativity, their rigour, and their willingness to take risks, such as by challenging the given program. Over a subsequent six-year period, from 2011 to 2017, the firm participated in several competitions and was selected to build four libraries. These included the Maison

de la littérature, a delicate intervention in the oldest part of Québec City. The renovated building with its thoughtful contemporary addition opened its doors in 2015 and received a Governor General’s Medal in 2018 (see CA, June 2016 and May 2018). The other three libraries— two in Montreal and the latest one in Drummondville—are perhaps less prestigious, but they clearly show how the firm has developed and refined its concepts over time. “Our projects are all different, but there is a common thread weaving its way through each of them,” says Chevalier.” 3 This “thread” becomes obvious when comparing the Saul-Bellow Library (2011-2015), to the Pierrefonds Library (2012-2018), and finally to the Drummondville Library (2014-2017). Ideas of formal vocabulary and space planning, perceptible in the relatively low-key Saul-Bellow addition, lead quite logically to the Pierrefonds expansion. With Drummondville—the office’s first freestanding library project—Chevalier Morales was finally able to fully explore the freedom provided by an openended site. The volume pulls in and out according to its orientation and to the functions within. Cantilevers provide protection from rain and snow, while sunlight is controlled through the materiality of the façade. These decisions achieve sustainability beyond the prescriptions of LEED. The building’s envelope is made of translucent ceramic frit glass where the walls are solid, and clear glass where there are views to the outside. The effect is particularly striking at the corners, where the glass panels curve. Despite initial appearances of a transparent volume, close to twothirds of the exterior walls are solid; steel plates are placed behind the glass envelope, over insulation, giving the façades a slight bluish tinge.