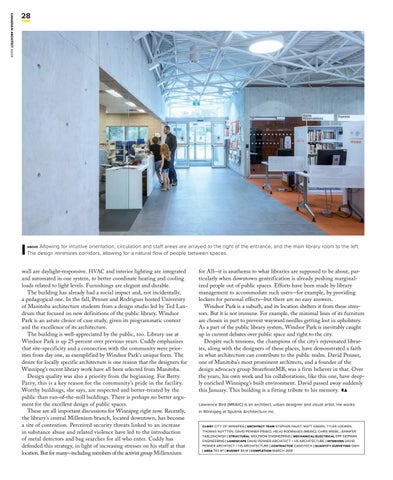 ABOVE Allowing for intuitive orientation, circulation and staff areas are arrayed to the right of the entrance, and the main library room to the left. The design minimizes corridors, allowing for a natural flow of people between spaces.

wall are daylight-responsive. HVAC and interior lighting are integrated and automated in one system, to better coordinate heating and cooling loads related to light levels. Furnishings are elegant and durable. The building has already had a social impact and, not incidentally, a pedagogical one. In the fall, Penner and Rodrigues hosted University of Manitoba architecture students from a design studio led by Ted Landrum that focused on new definitions of the public library. Windsor Park is an astute choice of case study, given its programmatic context and the excellence of its architecture. The building is well-appreciated by the public, too. Library use at Windsor Park is up 25 percent over previous years. Cuddy emphasizes that site-specificity and a connection with the community were priorities from day one, as exemplified by Windsor Park’s unique form. The desire for locally specific architecture is one reason that the designers for Winnipeg’s recent library work have all been selected from Manitoba. Design quality was also a priority from the beginning. For Betty Parry, this is a key reason for the community’s pride in the facility. Worthy buildings, she says, are respected and better-treated by the public than run-of-the-mill buildings. There is perhaps no better argument for the excellent design of public spaces. These are all important discussions for Winnipeg right now. Recently, the library’s central Millenium branch, located downtown, has become a site of contention. Perceived security threats linked to an increase in substance abuse and related violence have led to the introduction of metal detectors and bag searches for all who enter. Cuddy has defended this strategy, in light of increasing stresses on his staff at that location. But for many—including members of the activist group Millennium

for All—it is anathema to what libraries are supposed to be about, particularly when downtown gentrification is already pushing marginalized people out of public spaces. Efforts have been made by library management to accommodate such users—for example, by providing lockers for personal effects—but there are no easy answers. Windsor Park is a suburb, and its location shelters it from these stressors. But it is not immune. For example, the minimal lines of its furniture are chosen in part to prevent wayward needles getting lost in upholstery. As a part of the public library system, Windsor Park is inevitably caught up in current debates over public space and right to the city. Despite such tensions, the champions of the city’s rejuvenated libraries, along with the designers of these places, have demonstrated a faith in what architecture can contribute to the public realm. David Penner, one of Manitoba’s most prominent architects, and a founder of the design advocacy group StorefrontMB, was a firm believer in that. Over the years, his own work and his collaborations, like this one, have deeply enriched Winnipeg’s built environment. David passed away suddenly this January. This building is a fitting tribute to his memory. Lawrence Bird (MRAIC) is an architect, urban designer and visual artist. He works in Winnipeg at Sputnik Architecture inc. CLIENT CITY OF WINNIPEG | ARCHITECT TEAM STEPHEN FAUST, MATT HAGEN, TYLER LOEWEN,