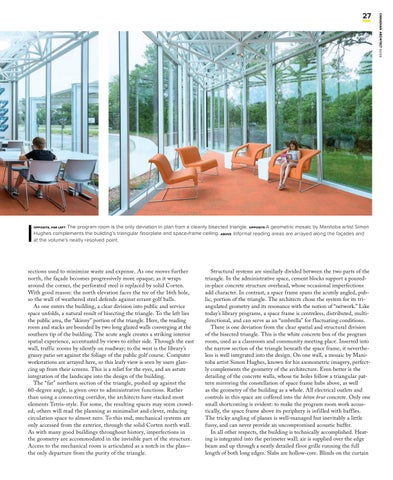 The program room is the only deviation in plan from a cleanly bisected triangle. OPPOSITE A geometric mosaic by Manitoba artist Simon Hughes complements the building’s triangular floorplate and space-frame ceiling. ABOVE Informal reading areas are arrayed along the façades and at the volume’s neatly resolved point. OPPOSITE, FAR LEFT

sections used to minimize waste and expense. As one moves further north, the façade becomes progressively more opaque; as it wraps around the corner, the perforated steel is replaced by solid Corten. With good reason: the north elevation faces the tee of the 16th hole, so the wall of weathered steel defends against errant golf balls. As one enters the building, a clear division into public and service space unfolds, a natural result of bisecting the triangle. To the left lies the public area, the “skinny” portion of the triangle. Here, the reading room and stacks are bounded by two long glazed walls converging at the southern tip of the building. The acute angle creates a striking interior spatial experience, accentuated by views to either side. Through the east wall, traffic zooms by silently on roadway; to the west is the library’s grassy patio set against the foliage of the public golf course. Computer workstations are arrayed here, so this leafy view is seen by users glancing up from their screens. This is a relief for the eyes, and an astute integration of the landscape into the design of the building. The “fat” northern section of the triangle, pushed up against the 60-degree angle, is given over to administrative functions. Rather than using a connecting corridor, the architects have stacked most elements Tetris-style. For some, the resulting spaces may seem crowded; others will read the planning as minimalist and clever, reducing circulation space to almost zero. To this end, mechanical systems are only accessed from the exterior, through the solid Corten north wall. As with many good buildings throughout history, imperfections in the geometry are accommodated in the invisible part of the structure. Access to the mechanical room is articulated as a notch in the plan— the only departure from the purity of the triangle.

Structural systems are similarly divided between the two parts of the triangle. In the administrative space, cement blocks support a pouredin-place concrete structure overhead, whose occasional imperfections add character. In contrast, a space frame spans the acutely angled, public, portion of the triangle. The architects chose the system for its triangulated geometry and its resonance with the notion of “network.” Like today’s library programs, a space frame is centreless, distributed, multidirectional, and can serve as an “umbrella” for fluctuating conditions. There is one deviation from the clear spatial and structural division of the bisected triangle. This is the white concrete box of the program room, used as a classroom and community meeting place. Inserted into the narrow section of the triangle beneath the space frame, it nevertheless is well integrated into the design. On one wall, a mosaic by Manitoba artist Simon Hughes, known for his axonometric imagery, perfectly complements the geometry of the architecture. Even better is the detailing of the concrete walls, whose tie holes follow a triangular pattern mirroring the constellation of space frame hubs above, as well as the geometry of the building as a whole. All electrical outlets and controls in this space are coffered into the béton brut concrete. Only one small shortcoming is evident: to make the program room work acoustically, the space frame above its periphery is infilled with baff les. The tricky angling of planes is well-managed but inevitably a little fussy, and can never provide an uncompromised acoustic buffer. In all other respects, the building is technically accomplished. Heating is integrated into the perimeter wall; air is supplied over the edge beam and up through a neatly detailed floor grille running the full length of both long edges. Slabs are hollow-core. Blinds on the curtain