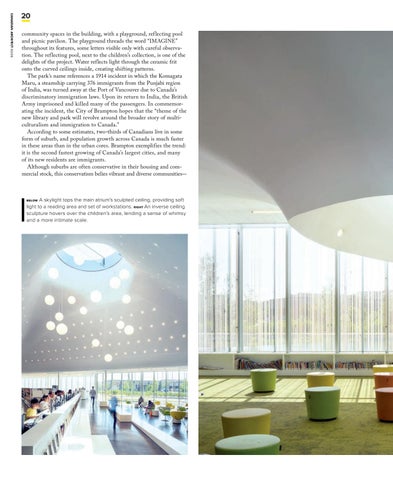 20 community spaces in the building, with a playground, reflecting pool and picnic pavilion. The playground threads the word “IMAGINE” throughout its features, some letters visible only with careful observation. The reflecting pool, next to the children’s collection, is one of the delights of the project. Water reflects light through the ceramic frit onto the curved ceilings inside, creating shifting patterns. The park’s name references a 1914 incident in which the Komagata Maru, a steamship carrying 376 immigrants from the Punjabi region of India, was turned away at the Port of Vancouver due to Canada’s discriminatory immigration laws. Upon its return to India, the British Army imprisoned and killed many of the passengers. In commemorating the incident, the City of Brampton hopes that the “theme of the new library and park will revolve around the broader story of multiculturalism and immigration to Canada.” According to some estimates, two-thirds of Canadians live in some form of suburb, and population growth across Canada is much faster in these areas than in the urban cores. Brampton exemplifies the trend: it is the second fastest growing of Canada’s largest cities, and many of its new residents are immigrants. Although suburbs are often conservative in their housing and commercial stock, this conservatism belies vibrant and diverse communities—

A skylight tops the main atrium’s sculpted ceiling, providing soft light to a reading area and set of workstations. Right An inverse ceiling sculpture hovers over the children’s area, lending a sense of whimsy and a more intimate scale. Below