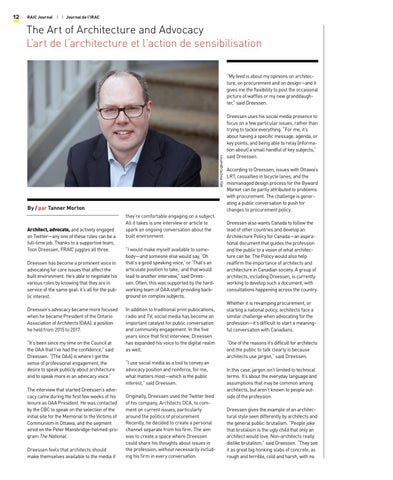 “My feed is about my opinions on architecture, on procurement and on design—and it gives me the flexibility to post the occasional picture of waffles or my new granddaughter,” said Dreessen.

Architect, advocate, and actively engaged on Twitter—any one of these roles can be a full-time job. Thanks to a supportive team, Toon Dreessen, FRAIC juggles all three. Dreessen has become a prominent voice in advocating for core issues that affect the built environment. He’s able to negotiate his various roles by knowing that they are in service of the same goal: it’s all for the public interest. Dreessen’s advocacy became more focused when he became President of the Ontario Association of Architects (OAA), a position he held from 2015 to 2017. “It’s been since my time on the Council at the OAA that I’ve had the confidence,” said Dreessen. “[The OAA] is where I got the sense of professional engagement, the desire to speak publicly about architecture and to speak more in an advocacy voice.” The interview that started Dreessen’s advocacy came during the first few weeks of his tenure as OAA President. He was contacted by the CBC to speak on the selection of the initial site for the Memorial to the Victims of Communism in Ottawa, and the segment aired on the Peter Mansbridge-helmed-program The National. Dreessen feels that architects should make themselves available to the media if

they’re comfortable engaging on a subject. All it takes is one interview or article to spark an ongoing conversation about the built environment. “I would make myself available to somebody—and someone else would say, ‘Oh that’s a good speaking voice,’ or ‘That’s an articulate position to take,’ and that would lead to another interview,” said Dreessen. Often, this was supported by the hardworking team of OAA staff providing background on complex subjects. In addition to traditional print publications, radio and TV, social media has become an important catalyst for public conversation and community engagement. In the five years since that first interview, Dreessen has expanded his voice to the digital realm as well. “I use social media as a tool to convey an advocacy position and reinforce, for me, what matters most—which is the public interest,” said Dreessen. Originally, Dreessen used the Twitter feed of his company, Architects DCA, to comment on current issues, particularly around the politics of procurement. Recently, he decided to create a personal channel separate from his firm. The aim was to create a space where Dreessen could share his thoughts about issues in the profession, without necessarily including his firm in every conversation.

Dreessen uses his social media presence to focus on a few particular issues, rather than trying to tackle everything. “For me, it’s about having a specific message, agenda, or key points, and being able to relay [information about] a small handful of key subjects,” said Dreessen. According to Dreessen, issues with Ottawa’s LRT, casualties in bicycle lanes, and the mismanaged design process for the Byward Market can be partly attributed to problems with procurement. The challenge is generating a public conversation to push for changes to procurement policy. Dreessen also wants Canada to follow the lead of other countries and develop an Architecture Policy for Canada—an aspirational document that guides the profession and the public to a vision of what architecture can be. The Policy would also help reaffirm the importance of architects and architecture in Canadian society. A group of architects, including Dreessen, is currently working to develop such a document, with consultations happening across the country. Whether it is revamping procurement, or starting a national policy, architects face a similar challenge when advocating for the profession—it’s difficult to start a meaningful conversation with Canadians. “One of the reasons it’s difficult for architects and the public to talk clearly is because architects use jargon,” said Dreessen. In this case, jargon isn’t limited to technical terms. It’s about the everyday language and assumptions that may be common among architects, but aren’t known to people outside of the profession. Dreessen gives the example of an architectural style seen differently by architects and the general public: brutalism. “People joke that brutalism is the ugly child that only an architect would love. Non-architects really dislike brutalism,” said Dreessen. “They see it as great big honking slabs of concrete, as rough and terrible, cold and harsh, with no